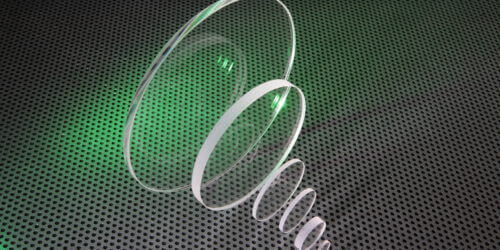 Fused Silica is part of a family of optical materials (along with quartz and fused quartz) which share properties including a high working temperature, high melting temperature and low expansion coefficient.

The term “fused silica” is often used interchangeably with the term “fused quartz”. However, fused silica exhibits superior optical and thermal properties which are distinct from fused quartz (and other types of glass) due to its very high level of purity (99.9999%). This is because of its manufacture from one single ingredient.

Generally for using the material in the UV ultraviolet below 250nm, Fused Silica would be more suitable material for greater transmission in this wavelength.

It is a non-crystalline glass form of silicon dioxide which is manufactured by melting crystalline silica such as sand or rock crystal.

As well as being referred to as fused quartz, fused silica is also called synthetic quartz.

It is manufactured from silica sand of very high purity.

Properties of fused silica include:

Many basic properties of fused silica are the same as fused quartz, yet there are some differences that determine which material should be used for certain applications.

Small differences in purity can affect the transmission characteristics of the final product, which, for instance are superior in the UV range for fused silica compared to fused quartz.

What is fused silica used for?

Fused silica offers extremely efficient wave transmission on the ultraviolet spectrum, so is commonly used in the manufacture of UV windows, UV lenses and optics.

Large sheets can also be made for UV sterilisation for Covid applications.

Because of its low coefficient of thermal expansion, fused silica is also used in the production of precision mirror substrates, semiconductors and laboratory equipment.

Specific optical components applications where fused silica is used include:

Because fused silica is stable for short periods at temperatures of up to 1200 degrees Celsius, it can be used in a variety of applications such as solar cells and batteries where operating temperatures are extreme.

We stock a wide range of optical components, glasses and windows in fused silica from a variety of manufacturers.

We offer a variety of UV and AR coating options on our fused silica windows, each of which offers distinct advantages.

Fused silica is difficult to fabricate and thus is the most expensive out of fused quartz and fused silica.

Silica in its basic form – SiO2 – is the most common constituent of the earth’s crust, estimated at 60% of the material up to the first 10 miles of depth.

There are great regional variations in silica purity across the earth.

In Europe, the highest grades of transparent fused silica glass are made from rock crystal known as geyserite which is found in Iceland, Germany, Sweden and elsewhere.

Because of its strength, fused silica has been used in various extreme conditions such as in deep sea submersible craft and space craft.

Fused silica was use to fabricate some of the windows on the International Space Station and, because of its high temperature resistance, it was also used on the space shuttles.

To find out more about fused silica windows from UQG Optics, or any of our optical windows call us on 01223 420329 or email our sales team at info@uqgoptics.com

We use cookies to ensure that we give you the best experience on our website. If you continue to use this site we will assume that you are happy with it.Ok